The Orions are a warp capable humanoid species from the Alpha Quadrant. Their homeworld is the planet Orion, in the Orion system.

They are known for their distinctive green or blue skin. Orion males are on average bald, taller and more muscular than the average human. The females of the Orion species were very animalistic in nature, known for their extreme carnal appetites and their innate seduction skills. A human male could rarely resist the alluring dance of the Orion slave girl. 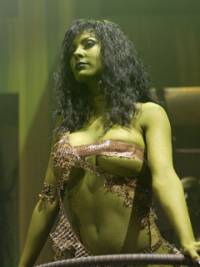 Before 2270, the Orions tried to maintain an air of neutrality in and around Federation space. This was done mainly as a guise to cover their more shady operations. This position of neutrality comes before ship and crew, all unsuccessful Orion missions end in suicide.

In spite of the Orion society's rich cultural history and “official” stance of neutrality, the truth is that of a dark side to the culture in the form of trafficking of forced labor through the Orion slave markets, most especially the Orion slave girls. 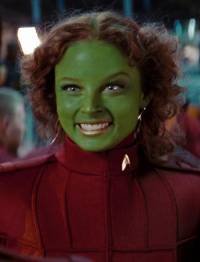 The main group that controls activities is known as the Orion Syndicate, which is made up of traders, pirates and smugglers. The Syndicate is well known for its many illegal operations including extortion, theft, raids, kidnappings and assassinations.