(this is a fluid doc, starting at what may be the most vital things for most players to know)

*Side note: Commands will be in brackets, do not use the brackets

[help eng] gets the help file with all the commands

[power] will give a high level of systems listed in groups. In side those groups are the components 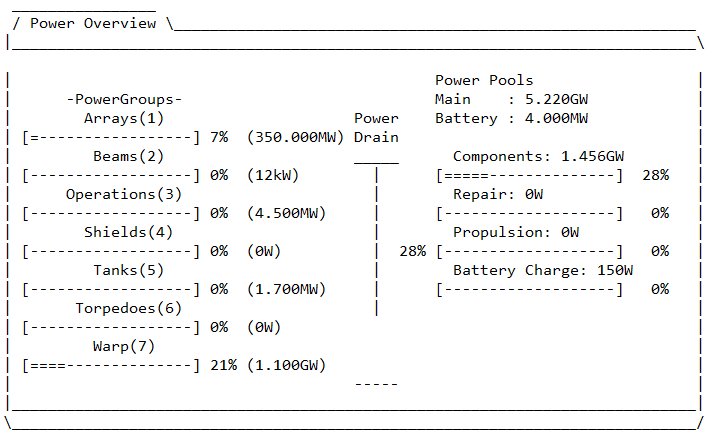 *Side-note: group names are formed by whomever set up engineering on that ship or station, it may not be standard naming conventions across the game. Nacelles may be in the Warp group on one station, or perhaps a group called Engines. 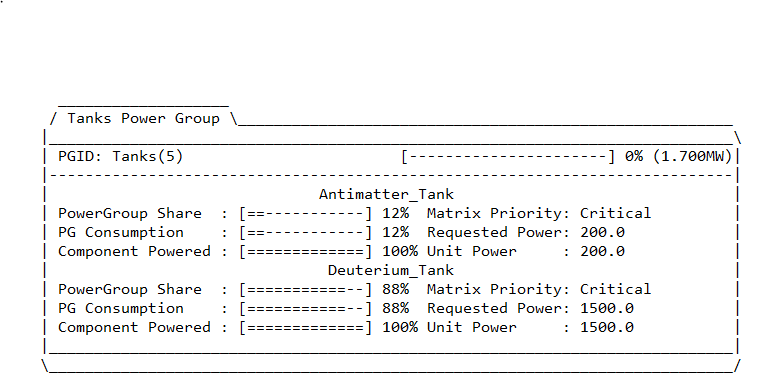 *Side note: Ship functions are a collection of Components, these are separated in Power Groups (above) to allocate power easier.

In the case that you need more details on a component or need to know how much power it needs to run nominally. You use 'cquery'. To see the specific details on the 'Antimatter_Tank' you would use [cquery antimatter_tank].

You can see in the example above that this components power needs are 200… you can also see if and how much power is assigned to it by allocated power. This command is useful not only to see power allocations, but also when setting up engineering components in a new ship or when modifying.

To power or unpower something is done by [power Group OR component=HowMuchPower] - You can find these group names or component names with the power and pg commands. And how much power they need from the cquery command. All discussed above.

The engineering table can adjust speed of a ship as well, with the [engage WarpFactor] or

Damage control is another area of engineering. [dmg team stat] will give you all the damage control teams, and what they are working on. [dmg assign TeamNumber=WhichSystem] will assign them, for example if you are traveling at high warp that will damage Hull, and both Nacelles. You will want to assign most of the teams to Hull, and even out some over the Nacelles. So 'dmg assign 1=Hull' will put team 1 on repairing the Hull and so forth.

Other commands are general stat commands, like [fuel stat] and such.

The PGADD, PGDEL, etc are commands to add and remove groups, components, etc and can be covered in a more advanced how-to