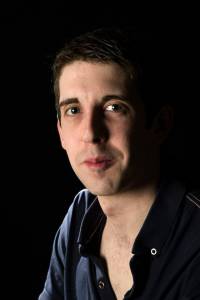 James 'Jimmy' Arthur William Darlington, 30th Earl Roslyn, was born in the Earth year 2362 is the only child of Lieutenant Commander Alexander Darlington, 29th Earl Roslyn and Doctor Jennifer Darlington M.D. James was born aboard the USS Ajax, whilst his parents were en-route to his father's new posting at Spacedock and raised in his ancestral homeland of the Scottish Highlands on Earth. James' relationship with his father soured considerably after the death of his mother in a freak shuttle accident. Mainly due to his father's past-experiences, harsh upbringing, and his commitment to Starfleet, James held a deep resentment towards his father in his years as a child. At the age of six in 2368, James was left in the care of a family friend on Earth when his father returned to active duty, persuaded by his friend and colleague Captain Tom Gregson. His father was later killed during an away mission.

James was left alone in the cold, both of his parents now dead. With no family to turn to, and guilt ridden about inadvertently causing the death of his friend, Gregson took the young James Darlington in as his Guardian and raised him, returning to the glens of Scotland. His formulative years were spent between private schools and learning the craft of a Ghillie from Gregson, spending his spare time learning to shoot, track and to fend for himself in the harsh environment that Scotland's Highlands can be.

Nearing the end of his time in education, James became more and more interested in the idea of serving with Starfleet, despite resenting everything that turned his father into what he was. Gregson on the other hand, was nearly the opposite of how his father had treated him and showed that despite being a soldier, you could still be 'human'.

Being the son of and raised by a Starfleet officer, James enrolled and was accepted into Starfleet Academy and arriving in the Plebe Summer of 2380 and assigned to Lima Company. During his initial six weeks of the Plebe Summer, Cadet Darlington found himself adjusting with more ease than some of his peers due to his upbringing and found himself at least a little thankful to his father for the harsh upbringing melt out to him during his younger years.

Darlington's first year began in earnest, though initially considering what comforts or therein lack of granted by his status as a fourth-class cadet as little better than prison life, he grew accustomed to the idea of entitled to nothing and striving to earn what he did. After completing his initial training and following the Borg invasion, James opted to major in both Strategic Operations and Security Operations, while further still opting to minor in Flight Control.

As the war progressed and ended during his second and third years, although primarily engaged in study sessions with fellow Strategic Operations and Security class Cadets, James completed his flight training and undertook advanced courses in hand-to-hand combat and weapon proficiency training. It was at this time James discovered his love of Ju-Jitsu, something that remains a passion of his to this day.

In his fourth year, he was assigned to a border patrol-based heavy cruiser for his six month Cadet Cruise, returning to Starfleet Academy in 2384 to commission as an Ensign the same year.

Part of James' private nature includes a difficulty in confronting deep personal issues, which then tend to become suppressed. Philosophically, he sees life and death as more than two choices of eternal or momentary existence. He believes there is another concept yet beyond human understanding. Genetic engineering with its pre-determination disturbs him, saying it robs humanity of the unknown factor that makes life worth living. Having to be patient in the presence of mounting problems, even if it is unavoidable or even the best path to take, is unsettling to him, nevertheless, he has shown a clear skill in knowing when to solicit opinions and when to act decisively. James had few friends as a child and self-admittedly “skipped his childhood,” due to his early, single-minded drive to join Starfleet. James graduated at or near the top of his Academy class, even though he once failed an Academy class over a woman and was called at least once to the Academy Superintendent's office.

James keeps a healthy outlook on life with a wide variety of interests and recreational pursuits and enjoys pushing himself to the limit, both mentally and physically. James' stress levels actually drop when the stakes are higher. He is prone to boredom and mild depression when not challenged. James enjoys drinking and gambling, although the former seems to be a way for him to test his personal limits at times rather than a vice. James has been known to gamble more than he can afford to lose, although he always gambles with a plan and a clear understanding of the odds. He enjoys Terran literature in its written rather than visual display, though he avoids acting or any other performance art himself despite an interest in classical music. He has studied semantics and keeps his Latin fresh, but has no interest in politics, dance or small animals.

James seeks structure in his life. He is a man of pattern and habit. He has acquired strong tastes. He both thrives under structure yet finds subtle ways of rebelling against it. He is not self-destructive, but he can be a challenge to his superiors. James uses humour as a shield and a weapon. He is skilled at making cutting remarks that reveal insecurities of others or mock death, danger and risk. Whilst skilled from his training in Operations Management and having been posted to a number of positions in that division, James's true forte lies within combat operations. He is proficient in the use of many different firearms, as a designated marksman as well as trained in close combat operations, subterfuge and demolitions.