The Trill are a humanoid species native to the planet Trill. A small proportion of the Trill population co-exists with a sentient symbiotic organism known as a symbiont inside their bodies. The resulting joined Trill have personalities which are a synthesis of the two beings including the memories, and to some extent the personalites, of the previous hosts of the symbiont. This way, the joined being gains all the skills and occupations of the previous hosts. The fact that some Trill exist as a joined symbiotic species is widely unknown, even to Federation scientists. 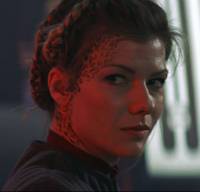 Most Trills are distinguished by two rows of spots going down each side of their body, from forehead to toe. One of the main neurotransmitters in the Trill brain is isoboramine.

Joined Trill are also extremely allergic to insect bites; the biochemical connections between the host and symbiont can not tolerate the reaction caused by the insect's venom. One Trill peculiarity is that they are known for having cold hands. 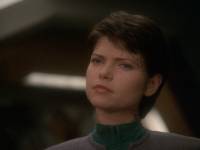 The few Trill that are given a symbiont are typically joined in their early to mid-twenties. The physical process of being joined is irreversible. Once joined, the host and symbiont are dependent on each other. If the symbiont is removed the host will die, even if they are otherwise healthy.

The Trill are not a secretive species. To them, the joined nature their culture is normal and not something they would think to comment on without prompting. Indeed, joined Trill can be seen as particularly genial and many have served the Federation as distinguished ambassadors and in Starfleet.

Trill don't look for romance the way Humans do. They consider it quite a nuisance and view it as a weakness of the young. Although a Trill host may have romantic feelings on occasion, it is the symbiont's wish to live on a higher plane and to try to rise above those sorts of temptations.

Trill law forbids reassociation between subsequent hosts of joined persons who were romantically involved. Trill who are found guilty of reassociation are expelled from Trill society, and their symbionts die with their current host.

The Trill are a technologically advanced species and the Trill Science Ministry is a leading center of learning and experimentation.

On average, only 300 symbionts are available for hosting each year. Because there are many more humanoid Trill than symbionts, prospective hosts are weeded out by a demanding selection procedure, overseen by the Symbiosis Commission. The competition for the few symbionts is fierce and attracts the brightest and most highly motivated of Trill society. Often the would-be hosts excel in their chosen fields and it is not uncommon for them to hold several degrees or distinctions prior to their joining. Prospective hosts may eventually become initiates under the supervision of a field docent, a joined Trill who evaluates the prospective host's suitability for joining and makes a recommendation to the Commission. A negative recommendation usually means the initiate is cut from the joining program.

Common knowledge in Trill society dictates that only 1 in 1,000 Trill make acceptable hosts. In fact, this figure is vastly understated, and is closer to 1 in 2. The myth is perpetuated very carefully, though, in order to avoid the widespread chaos which would arise if the information were made public, since the symbionts would become, essentially, objects to be fought over, as people fought to gain the few prized symbionts.

Unless the joined Trill objects, a prospective host may request a specific symbiont. If a host is weak, the personality of the symbiont will overwhelm it. The joined Trill has several tools at their disposal for dealing with various aspects of their previous hosts. The telepathic ceremony of Zhian'tara allows a current host to divest the symbiont of the personality and all the memories of a previous host, which are temporarily hosted in volunteers. The transferring process is performed and supervised by a symbiont Guardian, an unjoined Trill telepath. The ceremony creates a chance for closure by having the new host address the previous hosts directly as a means of distinguishing their voices and cementing the sense of finality of its latest transition. Similary, the Rite of Emergence can focus the voice of a single previous host among the memories of the other, allowing for a more direct converse in times of need for the current host.

The Zhian'tara ritual is roughly similar to the Vulcan fal-tor-pan ritual, since both enable the respective species to perform a synaptic pattern displacement, the transfer of what could be considered as a soul.